After you start officially showing, random people you don’t even know will all start to ask you the same question – “Do you know yet what you’re having?”  Then, when your belly gets even bigger, they’ll ask you “Is it a boy or a girl” assuming you know the answer. There are quite a few great reasons for not finding out the gender of your new baby.

2019 Update – I’m now pregnant with baby #4 and we’ve kept the gender a secret for 2 and found out the gender for 2. My stance on this has changed slightly – here’s why…

Should I Find Out the Gender of My First Baby?

My stance on this one has remained the same.

Especially if you’re going to have a natural childbirth, my best advice is to keep the gender of your baby a secret.

There’s already so much excitement surrounding your first baby, and especially if you plan to have more than one, you will NEVER get an opportunity for a surprise like this again.

I’ve had three natural childbirths and with the third, I knew I was having a little girl.

We were SO excited to meet her!

It was so much easier to get through natural birth with my first two because I couldn’t wait to get the baby here and find out what “it” was.

I know, I know. When you don’t find out the gender, people call the baby an “it” for lack of a pronoun. I’m honestly fine with that.

Should I Find Out the Gender of My Second Baby?

I’m going to say this one depends on a couple of things.

How old is your first born?

If they’re old enough to really understand the difference, maybe you’ll want to find out the gender to help make the transition easier.

It’s far easier for a toddler or young child to wrap their mind around the baby when they know if they’re having a brother or sister.

Plus, it’s much easier to get any disappointment out of the way while you’re pregnant so you can help redirect some of that negativity and turn it into something good.

When I got pregnant with our second baby, our first son was only 9 months old.

We knew we’d have about 17 months between our oldest two – but we also knew we would try for four babies total.

That meant it didn’t matter if this baby was a boy or a girl – we both kind of wanted another boy since they’d be so close in age, but we wouldn’t have been disappointed either way.

To this day, I honestly believe I wouldn’t have been disappointed no matter what gender any of our kids were.

What If You’re Disappointed About the Gender of Your Baby?

Especially if this is your last baby, you may be disappointed about not having the boy or girl you always dreamed.

One of my coworkers confided in me when I was pregnant that she regretted finding out the gender of her third baby after keeping the first and second a secret.

Her sister had convinced her that she was missing an opportunity to bond with her unborn baby not knowing the gender.

She found this not to be the case at all and was very disappointed when she found out her last baby would be a boy.

I think this can go either way.

Personally, I think it is best to get any disappointment out of the way while you’re pregnant.

If this is definitely your last baby, you  might consider finding out the gender if it really matters to you.

How Do You Avoid Finding Out the Gender at Ultrasounds?

Be sure to tell your ultrasound technician that you don’t want to know the gender, and remind them a few times throughout the exam.

I’m sure this might get a little annoying for them, but if it’s really important to you to keep the gender a secret – don’t leave any room for error.

My husband and I always pushed our foreheads together when they warned us we might be able to see the gender on the screen.

Holy crap was it so hard to not say “okay okay just tell me what it is!”

For our first two, we stayed strong and didn’t find out the gender until they were born.

They were both boys.

I felt like I knew they were boys from about 16 weeks, but it was such a relief when they were born to finally know.

It’s the best surprise in the world. Nothing compares.

When I got pregnant with our “third” baby, it was an extremely emotional time for us.

I miscarried our third pregnancy and we were devastated.

When I found out I was pregnant again, I didn’t even tell my husband.

I called our midwife and told her that we were out of town, but I wanted a blood test to confirm my hcg level and to see if it was rising consistent with a viable pregnancy.

That hcg came back later that day – 7.

I was maybe a week pregnant.

Two days later, it has to almost double…we were hoping for a 14.

We were slightly hopeful, but braced ourselves for another miscarriage and worried every single day of that first trimester.

The week before my 16 week ultrasound, I told my husband I had a feeling this baby was a girl.

He didn’t believe me.

I decided then and there that we would find out at my ultrasound, but I didn’t tell him my plans.

The video from that ultrasound and the tears of happiness in my husband’s eyes will forever be one of my favorite memories when the words “IT’S A GIRL” came up on the screen.

Finding Out the Gender for Older Siblings

This is the main reason we found out the gender of our 3rd and 4th babies.

Our oldest was 2.5 when I got pregnant with our daughter.

I knew it would be a much easier transition for both of our sons if they knew whether they were having a brother or a sister.

After having both experiences, I can still say there’s nothing like having that surprise at the birth.

What Do I Tell Other People When They Ask About the Baby’s Gender?

My response for our first two pregnancies was always “we don’t know, we decided not to find out.”  Some people congratulated us on our determination, other people responded “oh my God, I could NEVER do that!”

These were pretty easy for me.

I’m a planner and a control freak too, but I honestly didn’t want to know the sex of the baby I was carrying.

How will we decorate the nursery?  We bedshare, so we’ve never decorated a nursery.

Our babies all share our master bedroom with us and we’d have it no other way.

Or if you’re way less type A – these adorable gender neutral decorations are the solution you’re looking for if decor is a huge deciding factor for you.

Right now, you can get a gender neutral pregnancy pillow for $50 off using my link – simplelivingmommy50 – by clicking here.  A pretty awesome deal if you’re pregnant enough to be freaking uncomfortable – I couldn’t have survived my 3rd trimesters without this thing!

If you’re pregnant and are coming up to that appointment where you can find out if you’re carrying a boy or a girl, PLEASE take a minute and consider just for a second, holding off finding out what you’re having.

Reasons Not to Find Out the Gender of Your Baby

Did you find out the sex of your baby when you were pregnant?  Do you think you could make it through a whole pregnancy without caving and finding out what you’re having?  Let me know why or why not in the comments! 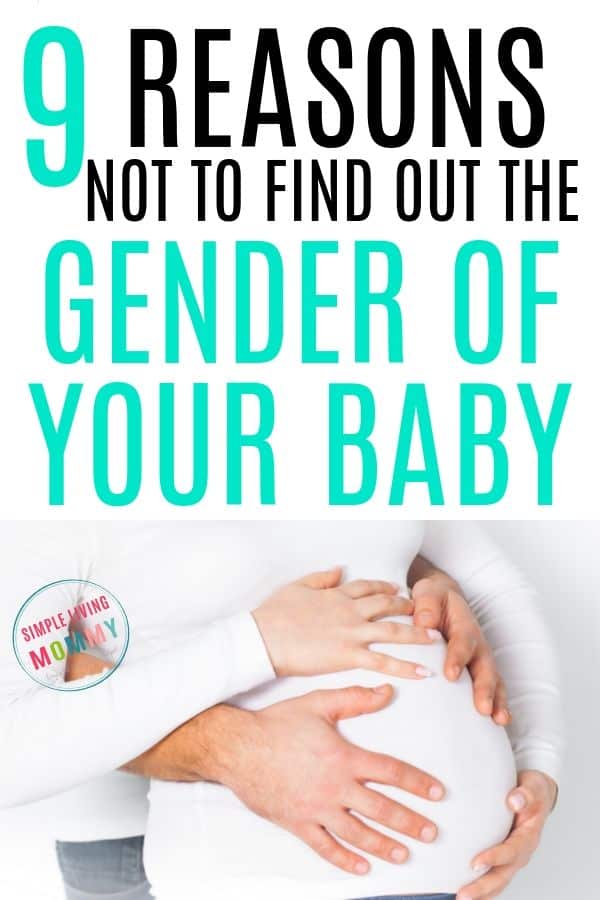 […] didn’t find out the gender, so we just helped him pick out a little teether […]

Totally agree with these! I have three girls. 1. Didnt find out. 2. Found out. 3. Didn't even have an ultrasound. I loved not knowing. With the second, I regretted finding out the second they told us. It's completely different, and better, bonding.

I'm pregnant with #2 now, and we didn't find out for this first one or this one. One bonus is that before #1 (a girl) was born, we got lots of gender-neutral stuff from people. So we can use all that stuff with #2, no matter what we get. Once she was born a girl, we got a lot of very girly stuff, which a )I wasn't crazy about, and b) we won't be able to use if #2 is a boy. With #1 I was so sure it was a girl, and with this one I'm so sure it's a boy. I was right the first time, and I feel like I don't even need an ultrasound to confirm that this one is a boy. I will definitely be surprised (but still delighted) if I get another girl! I love being a mama to a girl so much.

I've always felt that if you were supposed to know there would be an outward sign. Do you really only want to listen for "10 fingers, 10 toes"? Thanks for the post. I completely agree.

We didn't find out our babies gender and t became a game to us because everyone we knew wanted to know the gender; we kept leading in with "we're going to find out gender in September; you'll find out then too. " it made people mad but if I was to have a second I'd wait again 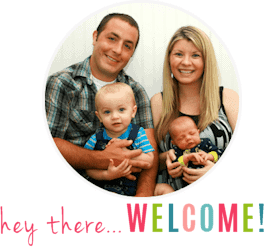 We are a participant in the Amazon Services LLC Associates Program, an affiliate advertising program designed to provide a means for us to earn fees by linking to Amazon.com and affiliated sites.
1677 shares