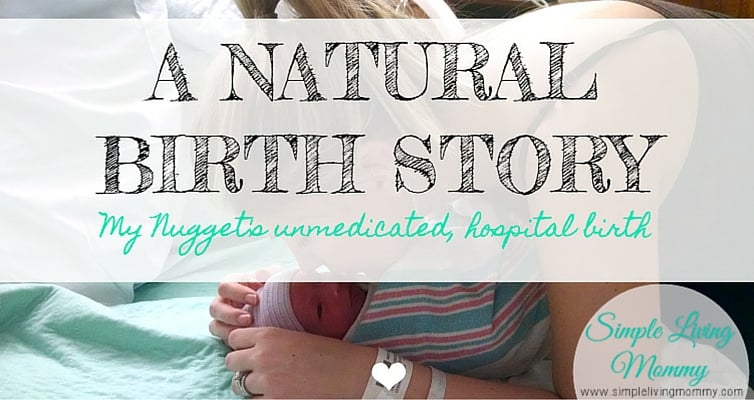 I don’t know about you, but when I was pregnant for the first time, I was overwhelmed at the amount of information being thrown at me regarding labor and delivery.  If I were to go to my PCP for my prenatal care, I would have to deliver at a hospital in our town that I wasn’t a huge fan of.  Switching doctors meant leaving behind the comfort that came with my current doctor’s office.  Did I want an epidural?  What would I put in my birth plan?

It wasn’t long before I decided I really wanted to try to have a natural birth without any pain medication.  I didn’t have a big scientific reason for wanting an intervention-free birth and I wasn’t overly concerned with some risk to the baby from an epidural or other pain medication.  I assumed if they were doing it in 2015, it must be risk-free.  I later found this assumption to be completely wrong.  My main reasoning at the time was born out of sheer stubbornness and my will to see if I was tough enough to go through with it.

Shortly after I made my decision, I researched birthing methods and settled on the Bradley Method.  My husband Scotty and I quickly enrolled in a local class and were eager to get started.  It was here that I really got the information I needed to decide that a natural birth was not only best for me, but it was what was best for my baby and our breastfeeding relationship.

Finally, the time was approaching for us to meet our little Nugget and we felt prepared for labor and delivery.

If I’m being honest, Nugget’s birth story starts about 3 weeks before I actually delivered him, but I’ll start at the very beginning.

Scotty and I wanted to get married, but didn’t have the money for a ring, a wedding, and I felt like it would take forever before we were going to have kids. I remember standing in our bedroom discussing these exact things and how we’d be into our 30’s before we could start trying for a family because we both wanted a year or so as a married couple before adding children to the mix.

One day we were discussing getting married and I told Scotty I really wanted to elope before the big day. We could secretly do it so no one would know, but after planning my girlfriend’s wedding with her, I just knew I would let stress get the best of me and ruin our day. My solution was to elope a few weeks before and have an intimate memory that the two of us could cherish. Since we couldn’t afford a wedding this year, I suggested we shoot for next year. Scotty sweetly looked at me and said “but I don’t want to wait to get married…” I suggested we elope this year and have a wedding/vow renewal next year to celebrate with friends. It seemed like a good compromise. We could be married and I’d still get to feel like a bride with all of our loved ones.

We knew we would get married in Charleston. I’ve fantasized about it since I was young. We decided to go to Charleston over Easter to apply for our marriage license. While we were there, I missed two birth control pills and decided to just start taking a new pack after my next cycle. That was at the end of April, 2014.

We decided to elope on the 4th of July. Very fitting for us because we’re both very patriotic and my husband is a veteran. The 4th of July was on a Friday in 2014, a Saturday in 2015. It was perfect for our vow renewal plans. As the big day got closer, I realized I still hadn’t started my period. I remember getting my nails done with my friend before her bridal shower and googling with one hand if irregular periods meant I would have difficulty getting pregnant. It did, according to my search. I worried out loud about this to Scotty and we decided to make a doctor’s appointment.

The Day That Changed Everything

June 20th, Scotty took off work to come with me to my appointment. I was determined to discuss how difficult it would be for us to get pregnant one day. I wanted to start trying to get pregnant shortly after our vow renewal in 2015 and didn’t want to have to wait for years before we found out we were expecting. Numerous friends were going through trying times trying to conceive and I was sure this was going to be our fate as well.

I lamented my fears to the doctor as I sat there in my gown with a sheet over my lap. She has been my doctor for years and is used to my dramatic fears. We discussed birth control options and I told her I didn’t think it was necessary since I have a period once every 3 months. I figured I’d play my odds. As she told me I’d have to take a pregnancy test since I hadn’t been on birth control, I rolled my eyes and said I can already tell you what it will say.

As I waddled out of the room in my backward gown trying to hold it closed, my doctor watched me disappear into the bathroom and looked at Scotty and said “when you leave here, go buy condoms.”  They shared a few jokes while I did my thing in the bathroom.  I made my way back into the exam room and chatted with Scotty while we waited for the doctor to confirm that I wasn’t pregnant so we could get back to discussing what must be wrong with me and how much trouble I would have getting pregnant.

My doctor reentered the room and with eyes the size of snowglobes said “oh it’s positive…” Scott and I looked at each other and then back at the doctor. Scotty’s eyes filled up with tears as I asked if she was serious. “Are you kidding?” Her response was what Scotty reiterated to me throughout my pregnancy “I’m not allowed to joke about that and wouldn’t even if I could. It’s OK though. It’s more than OK.”

Scotty continued to tear up in his chair while I sat in my gown on the table, completely taken aback and confused. “Why are you crying?” I rudely demanded of him. “Why is he crying?!” I demanded of my doctor when he didn’t answer. “Are these happy tears? Are you disappointed?!” He ignored me and cried to the doctor “we’ve always wanted this!” I hopped down from the table and waddled over to check on him. Finally, I was satisfied that he was alright and was actually excited about our pending arrival and not stressed or upset about it.

Looking back, I should have known he wouldn’t be upset or disappointed in any way.  My husband has always dreamed about being a father just like I’ve always dreamed about being a mother.  Finding each other, falling in love, and finally realizing this dream together was just meant to be.  It just didn’t happen to be on my timeline (how dare things not go my way!) so I was completely frazzled and unprepared.

We scheduled a sonogram for a week from that day and waited to see how far along we were. Based on how quickly my pregnancy test at the doctor’s office displayed two lines, my doctor estimated that I was three, maybe even four months pregnant already.

While I hated that I would have missed that much of my pregnancy not even knowing I was pregnant, I was thankful that that would mean we were “out of the woods” of the first trimester.

At 2 o’clock in the afternoon the same day we’d found out we were pregnant, we had our second premarital counseling appointment. I hesitantly told the counselor that we were expecting and she was surprised, but very happy for us. We arranged a series of more appointments and my head was spinning.

That night, I had a terrible headache. I suffer from migraines and couldn’t shake this one. I spent the entire weekend in the bathroom throwing up and ended up losing 5 pounds between my migraine and morning sickness. I even missed a Luke Bryan concert that I had really been looking forward to!

Finally, the week passed us by and we made it to our first ultrasound appointment. I told the tech that I did not want to know the sex of the baby and she reassured me that it was probably too soon to tell. The ultrasound revealed that we were only 6 weeks and 1 day along. This was good news in that it gave us more time to plan and to let it sink in that we were pregnant, but also scary news because I really wanted to get into that safe zone.

Now for the good part…  Mainly because this is about to be an insanely long post, stay tuned for Part 2 of Nugget’s birth story!

9 Compelling Reasons Not to Find Out the Gender of Your Baby! - Simple Living Mommy

[…] With our first son, we had been purposely trying NOT to get pregnant, and then found out we had a little one on the way.  It was the best surprise ever and we truly had no idea.  Usually though, you’re […]

Products We Used Most for Baby #1 - Simple Living Mommy

[…]  You could seriously go bankrupt with one trip to Buy Buy Baby.  Here are the products we used most for baby #1…and used again for baby […]

[…] Throughout my whole second pregnancy, my main concern was that I wouldn’t be able to stay pregnant long enough to deliver at our birth center.  Our first son was born at just 34 weeks 6 days, so we had to go to the hospital instead.   […]

It's cool to hear that there's someone out there like me. I recently confirmed to someone that "no, I'm not using an epidural. Yes, I am shooting for natural birth #3." He asked me "why? Why you do that to yourself." And all I could say was "I like a challenge, I guess. I wanna see how tough I am and be able to brag about it." Lol!

Wow 3 natural births?! Good for you! I just had natural birth number 2 two weeks ago and I immediately said "next time, I'm getting an epidural!" I have already changed my mind back and fully plan to have two more natural births. It hurts and I kept thinking "Why do I choose to do this to myself?!" but after that baby gets here, it's so worth it! I just tell people there's no better way to feel like a bad ass than to have a baby without drugs haha

Why I Started a Blog - Simple Living Mommy

[…] I graduated from Penn State in 2014 with a degree in Psychology and every intention of going on to pursue my Master’s degree so I could one day be a marriage counselor.  That’s really all I’ve ever wanted to be.  I got pregnant with our son 2 weeks later. […]

We are a participant in the Amazon Services LLC Associates Program, an affiliate advertising program designed to provide a means for us to earn fees by linking to Amazon.com and affiliated sites.
645 shares