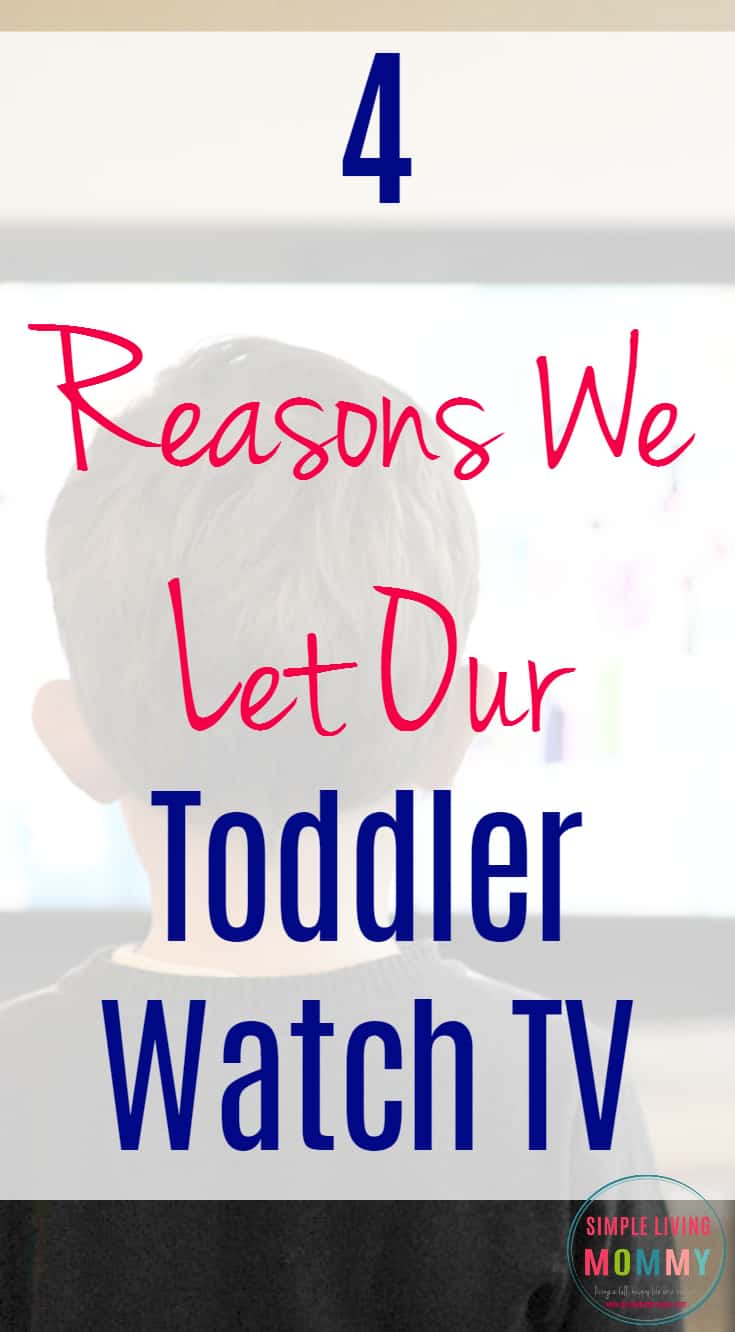 Should I Let My Toddler Watch TV?

Should I let my toddler watch TV? – I’ve heard a ton of arguments against screen time for little ones.  I’ve even seen families who move their TV out of their living room so they don’t have to worry about their kid watching TV if it happens to be on.  I’m really happy for people who have found what works for them, but some screen time now and then is what works for us.

First of all, we bedshare.

This means there isn’t really any time that we aren’t with our kids, even at night when other couples would probably have some time alone to watch TV childless if they wanted to.  Our toddler doesn’t go to sleep until around 10 pm when we finally settle in for the night.  My husband and I have always had “Netflix and chill” time to wind down at the end of the night.  Our kids just had to fit into that.

Here are the main reasons we let our toddler watch TV…

It Can Actually Be Educational

Instead of watching TV all the time, sometimes screen time in our house looks like playing ABC Mouse on our tablets.  We bought both of our boys these tablets and they have saved my sanity.  Not only are they one of the only tablets that you can use ABC Mouse on, but I can actually make phone calls in peace.  Success!

Honestly, I think a little screen time is okay when they’re learning at the same time.  Our 3 year old is super interested in the solar system now thanks to ABC Mouse.  There are tons of free apps that let kids color and use stickers, work with shapes and colors, and even read free books.

When they’re working and learning and don’t realize it, it’s a win in my book. 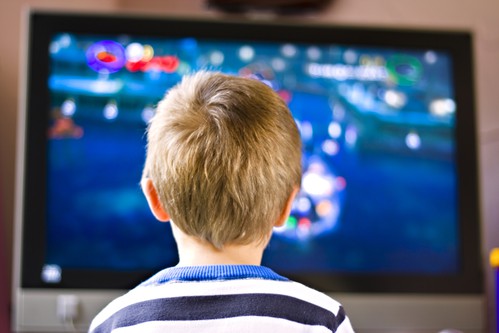 It distracts him while I’m sick

This was especially helpful while I was pregnant and had weekly migraines.  If you’re in the same boat, you can read all about what eventually worked for my migraines during pregnancy.

On the days that I’m laid up in bed with a really bad headache, you can bet I’ll be putting on a cartoon or something so I can lay around without worrying about our toddler tearing apart our house.

We don’t have anyone around who can help out on days like that, so the TV becomes my babysitter.

It helps settle him down before nap time

When we’ve been running around all morning or have been having a dance party (we do this every day.

It’s awesome for me to get a little bit of physical movement in while goofing off with my favorite playmates) it’s really hard to get the kids to wind down for a nap.  I completely realize this is my fault for getting them all riled up before nap time, but I never pass up a chance to have a ton of fun with my little people.

Sometimes, Nugget would absolutely refuse to nap if I didn’t force the issue.

If I tell him we’ll put “Buck” on and lay down together, he’ll usually lay with me and snuggle to watch his favorite movie.  Bribery anyone?  This is the speed change he needs to get him ready for a nap.

It has helped with language development

If I would have heard a mom say this before I had a toddler, I would have immediately decided she was lazy and making outrageous excuses for planting her kid in front of a TV because she wanted to shirk her parenting responsibilities.

The truth is, after Nugget’s 15-month doctor appointment, he stopped talking.

I’m telling you he literally stopped saying every single word he had been saying – mama, dada, dog, no, bottle… He stopped talking.  We were afraid this was some kind of reaction to a vaccine or something, but we blamed ourselves.

Maybe we didn’t read to him enough.

Maybe we didn’t describe our day out loud enough to him.  There had to be something we were doing wrong.  We started reading to him multiple times a day, but he had no interest in books and wanted to just run away and play other things.

We tried to get him engaged in things enough to repeat what we were saying.  No luck.

We bought a zoo membership.  And a membership to our local science center.  We started going to different parks more often to change up his scenery.

Still, he had no interest in repeating words.

One day, I think I was in bed with a migraine while my husband Scotty entertained the kids in our bedroom, and he said he was going to put on a movie for Nugget.

He put on Open Season.  We’re vegetarian (mostly vegan now) and it was kind of funny to have a movie about animals fighting back against hunters.  We thought it was cute and we all sat through it happily.

We kept trying to get Nugget to say different words, pointing out the bear, the water, the buck…nothing.

The next day, he pointed at the TV and said “buck?”

I had no idea what he was trying to tell me until I remembered that cute movie we had watched the day before.  He was asking to watch it again!  “Buck” is now what that movie is called in our house (whether we’re watching Open Season, Open Season 2, Open Season 3, or Open Season:  Scared Silly…they’re all “Buck” to him and they all make him just as happy.)

He started pointing out planes, boats, dogs, all kinds of different animals and objects in the movie.  It sounds crazy and lazy and I know…I hear it too.  But this stupid movie seriously got our son to start talking again.

Maybe it was a coincidence, maybe it’s a stretch, but I really believe it’s true.

TV time got him engaged and interested enough to repeat what we were trying to get him to say, and now he’s got probably 200 words – and he’s 2.  Quite a change from refusing to say a single one just a few months before.

Can I get an amen?

When I really need some quiet time while I make a phone call or if I just need to dedicate about 20 minutes to cleaning up after breakfast or lunch, turning on the TV works sometimes when nothing else does.  I think I’m a pretty patient mom, but there are definitely those days where I just want to pull my hair out and the toddler and I are just on different wave lengths.

We’re not jiving some days.

On those days that I feel like I don’t have the patience I need, I’ll take us outside and try to reset.  If that doesn’t work, I put on a movie and get some snacks and we just sit and regroup.  One of those two things almost always works.

Today, there’s a Steelers game on.  It would be bad parenting NOT to have the TV on 🙂 .

What’s working in our house…

For Christmas this year we purchased a toddler activity tower and – Oh my God – it is life-changing.  Sound dramatic?  It probably is, but that’s how dramatic the change in our house has been.  Particularly in our kitchen.

Nugget helps me cook, he helps me clean, he helps me do dishes and put them away…  He gets to actually do things in the kitchen that he would otherwise not be able to.  I love it because he gets to be my big helper and I don’t have to worry that he’s going to fall off a chair or step stool.

We wouldn’t always choose TV time when cooking or cleaning, but now and then when it would have been necessary before, I just pop him into that tower and ask him to help me.  He is so excited to help out and is proud of every single accomplishment.  If you have an active, curious toddler, I highly recommend one of these.  This is the exact one we have in the color “natural”.

Don’t get me wrong.  I don’t choose to give our 2-year-old screen time in place of actual quality time.  We spend all day on the floor together making messes and memories.

Do you let your little ones watch TV?  Why or why not?  Let me know in the comments!