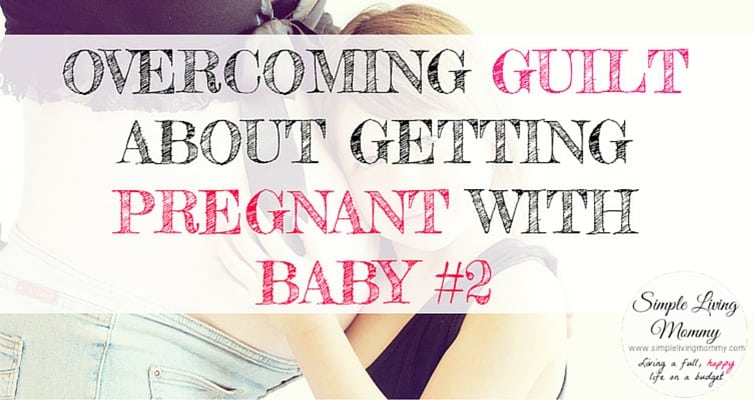 When we decided to start trying to get pregnant, I was so excited at the thought of having another baby.  I couldn’t wait to get pregnant and was so disappointed every month when I took a pregnancy test and was faced with another negative.  What I didn’t anticipate was feeling so guilty when I did finally get pregnant with baby number two.

As soon as I found out I was pregnant, I immediately looked at my little 9 month old and wondered what this would do to our relationship.

We spend every single day together and are completely inseparable.  I was immediately sick to my stomach (and it wasn’t just morning sickness!) wondering “what have I done?”

Was it too soon to have another baby?

Why did we try so hard to have another baby so soon instead of just enjoying our beautiful son?

It took a little while (and a good talk with our marriage counselor) before I realized I was being silly.

Our counselor completely dismissed my worries as normal and said as soon as the baby gets here those fears will go away.

As soon as she acted like I was just acting like any second-time mom would, my fears immediately eased up.

I knew deep down that there was so much to be excited about.  I read stories online about moms going through the same thing as me and it eased by guilt about feeling guilty.

I called a former coworker who I knew had two babies close together and told her my fears.

She is one of 5 kids and said she didn’t think twice about having a second baby so close to her first one.  She said it just seemed natural to her because she was from a bigger family.

There was a big clue to my anxiety.  Being an only child, OF COURSE I’m going to feel differently.  I had no idea what to expect with siblings because I’ve never had any!

The biggest piece of advice she gave me was to continue to look at my son as a baby, even after the new baby comes.

She said that her daughter was 17 months old when her son was born and that she immediately started to get snippy with her daughter for any wrongdoing because she felt like she should know better.

My friend’s mother even told her “she’s still a baby too…” but my friend didn’t think so.  She viewed her firstborn as a stubborn toddler instead of just an older baby trying to adjust to a new arrival.

After this conversation, I came up with some ground rules for myself to follow with my son when the new baby arrives.

Of course, we’ll have to teach him right from wrong and will show him how to treat his new brother or sister.  Right now, it looks like hitting and throwing things is going to be a big behavior issue we struggle with, BUT it isn’t our son’s fault that he has a new sibling coming.  We’re going to continue to raise him with gentle respect and show him the right way to behave instead of yelling or punishing him more harshly because there is a new baby in the picture.

The next thing I thought about to bring myself some comfort is how lonely my childhood was.  The good thing is that I ended up being best friends with my grandfather, my PapPap, and that got me through a very rough childhood.

However, it would have been amazing to have a person more my age to play with.  Especially because I grew up in the country without neighbors with kids my age.

My kids are never going to know what that’s like.  Yes, we live in the country and our kids are going to grow up playing in the dirt and running around barefoot, just like my husband and I always dreamed.  They’re going to do that together.

My son is losing his status as an only child, but he’s gaining a best friend.

I love that my Nugget will have a little camping buddy, a homeschooling buddy, a mess-making buddy…

I love that I’m going to get to yell at two of them for drawing on the walls or flushing toys down the toilet.  It excites me that the good memories people have of their childhoods will involve this other person who is growing in my belly as we speak.

My goals as a mother are to raise our family in such a healthy home that our babies are able to grow up with the same strong morals and values and remain close throughout their lives.

I’ve even told my son that the day this baby comes will be the day he sees his worst nightmare and his favorite dream come true.

I know that after everyone is settled in, he’ll love his new sibling and will never wish he could trade them for the world.

I read in my online travels about becoming a second-time mom that only one of your little ones will remember this time and to act accordingly.  Even though my firstborn is still too young to remember these moments, I thought that was an amazing piece of advice.

Plus, there is NEVER a bad time to have a new baby.  We view all babies as such gifts.  We couldn’t be more thrilled that we are being given the opportunity to have another baby so soon, especially after thinking it would be a huge struggle with my PCOS.

Did you have two babies close together?  Did you feel guilty when you first found out you were pregnant?  How did you handle it?  Let me know in the comments!