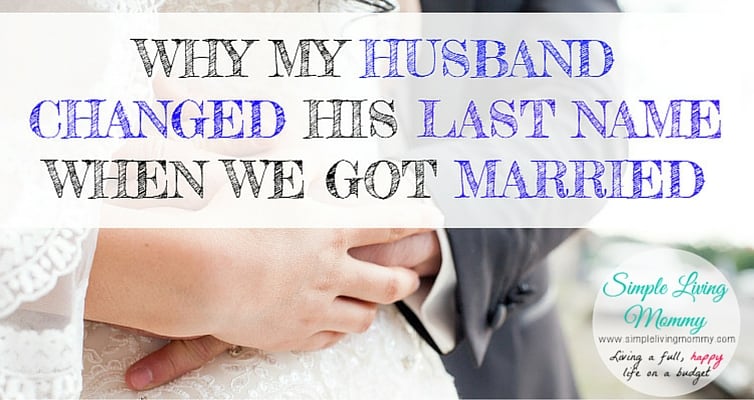 When most of my friends got engaged, they immediately started referring to themselves as the future Mrs. (insert future husband’s last name here).  I cringe every time I see it.  Why is it still so expected that the girl will change her last name to her husband’s when she gets married?  Not in my house!  I did change my last name when I married my best friend, but my husband changed his last name too.

Disclaimer:  Please don’t take my stance on this issue as a dig at anyone who does decide to take their husband’s last name when they get married.  In fact, I think that’s absolutely fine!  My issue with it is simply that it is still so expected of a woman when there are so many other awesome options.  If you took your husband’s last name and are proud of your last name, then please believe me when I tell you that I couldn’t be happier for you!

Scotty and I ultimately decided to hyphenate our names.  This resulted in the most ridiculous 17 character last name you’ve ever seen, but we LOVE it!

For us, keeping our own last names wasn’t an option.  We both really wanted to have the same last name as a family and wanted to pass our last name onto our kids, whatever we chose.

It actually wasn’t a pretty scenario how we came to our decision about our last name, but looking back, I really do love how it came about.

He was understandably upset and said (somewhat arrogantly) that his kids WOULD have his last name and on and on the fight went.  Knowing how our fights used to go, I’m sure we threatened to end the whole relationship over this issue.  (We’ve since gotten WAY better at this whole communication, fighting, marriage thing…I promise!)

As things always do, we eventually calmed down.  In the downtime between our argument and making up, I thought why should either of us have to sacrifice with such an important decision?

I gave it some serious thought and tried to decide what I’d be okay with.  Even though I knew whatever combination we came up with would be insane, I really liked the idea of hyphenating our names.

When we finally made up the next day, I went to Scotty and apologized for being so harsh and upsetting him.  My issue was with how his family was treating us, not at all with him.  I told him I absolutely want our kids to share his last name and told him that I just was uncomfortable with changing mine.

I asked what he’d think of a hyphenated last name.  Not just for me and any kids we might have, but for all of us – him included.

Part of when I knew that I would marry this man is when, without a second thought, he told me he loved the idea and was completely onboard and excited!

That’s how lucky I am!  My future husband was standing in front of me, enthusiastically agreeing to change his last name when we got married.

Keep in mind, we weren’t even engaged at the time!

We went on to talk about it more over the course of the rest of our dating relationship, and it just seemed to make more and more sense – for so many reasons.

First of all, we don’t have a good relationship with either of our families.  There’s a lot of dysfunction there and lots of drama.  We definitely weren’t attached to our birth names because we were proud of their meaning or proud of the other people who carry them.

We both just were pretty attached to our identities and to the accomplishments we’ve had under those names.  Hyphenating meant we’d get to keep our last names in some form, but we also didn’t have to associate completely with either family.

In fact, we are the only people in the whole world with our last name.

Hyphenating our names let us create a family name all our own.  It was our way of separating from both of our families and saying to the world “look, we’ve married each other, we love what we’re building, and we’re doing it under this amazing new name.”

The main reason we decided to hyphenate our names?  It just felt more respectful toward each other.

Neither of us was giving up a thing.  We were both gaining something.

We joined together when we got married.  I didn’t just join his family or join to him.  He joined to me, I joined to him, we’re walking through this life together.

Before we made this decision, I would think about changing my last name from time to time when we would dream out loud about getting married to each other.

This is my own crazy way of looking at things, but it bothered me immensely.  I promise I don’t judge other families who make exactly the decision I’m saying I could never make.  I’m simply saying I think everyone should really think it through before making such a life-altering decision on a whim.

When we decided to elope, it was finally time to pick what this crazy last name was going to be!  I left it up to Scotty.  I truly didn’t care which way he chose.  I was so excited to be marrying him and so ready to share our last names with each other that I couldn’t choose.  He eventually chose for my last name to go first and his to go last.  His last name was 4 characters longer than mine and he thought it would look really weird in the middle of a name.

We’re proudly the Wilson-Houghtalens.  Yep.  That’s the last name we give our poor children.

I’m fully aware they won’t be able to spell it until they graduate.  I know the IRS and every bank will always hate us for having a hyphen in our last name.  But guess what?

I have a last name I couldn’t be more proud of.  Every time I sign my insanely long last name, I’m reminded of what a loving decision I made with the love of my life.  It works for us.  The rest of the world will just have to adapt to this crazy name because we are so happy with it.

Something that surprised me after we eloped and told everyone about our last name was the reaction we got.  Almost every woman I know told me they wish they would have done something similar when they got married.

One mom in my mommy group who kept her last name when she got married told me how jealous she is of our decision and of how supportive my beautiful husband was about it.

Only a few of our guy friends gave my husband flack for it and now and then he’ll get teased about it at work.

I married him because he doesn’t give a sh*t either.  Otherwise, he wouldn’t be my husband.  I love a man with some confidence and a backbone!

Initially, I told my husband to lie to people who picked on him and tell them that we made this decision because I’m an only child and there would be no one else to carry on my dad’s last name.

This couldn’t be farther from the truth, but it sounded good at the time.  Now, I’ve corrected my mistake and told him to tell people the truth.  We decided this together and we’re proud of it!  The only thing I’m ashamed of is the fact that I ever cared enough about what other people would think that I encouraged my husband to be dishonest about our reasoning.  We should be so proud of this decision that we came to together.

Now, we carry a long last name, we started a family with that last name, and we both still get butterflies anytime we use it.  What more could I ask for?  I’m such a lucky girl!

Did you change your last name when you got married?  Why did you make the decision you made?  Would you change it now if you could?  Let me know in the comments!